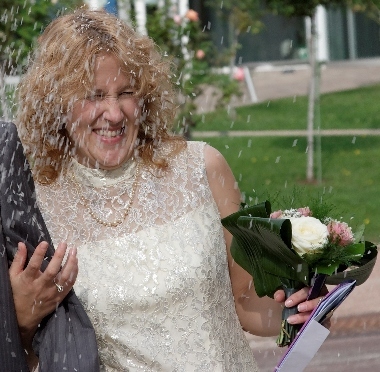 One of the reasons that I’ve not been posting very regularly is that I got married at the end of September, which upset my schedule both before and after the event, and I’m only now starting to get caught up again. For reasons that have to do with compiling thick dossiers of official documents bearing multiple seals and having them officially translated and then getting marreid before the French adminstration arbitrarily decide that things like my birth certificate have an expiration date, we basically only knew our wedding date about a month before the event, and, as luck would have it, the date wasn’t very convenient for anyone, even us. So our plans to have a small wedding became even smaller, with neither my father nor my brother able to join us. That is why my small, low-key wedding ending up becoming a social media event, which gave me an opportunity to experiment with integrating several tools.

This is the story of my social media wedding, otherwise known as My Wedding 2.0.

The first challenge we had was explaining the wedding traditions from our two cultures (French and American) to our families. For this, we revived our blog, which had fallen by the wayside when Facebook came along. Facebook does make it easy to share little tidbits, but many of our friends and family are not on Facebook yet. So the blog because the wedding destination online, and we pushed Facebook friends there with little teasers.

The next challenge was figuring out how to share the actual wedding ceremony. The original idea was to do a Skype hook-up so my father could attend virtually, with my brother hoping to be able to get a few hours off work to go to his house and watch too. But even better, I remembered hearing about a live-streaming app for iPhone, and I looked up Ustream.

Ustream allows you to broadcast live from anywhere to as many viewers as wish to bring up the website. The video stays online for people who can’t watch the live broadcast.

You get better quality with a wifi connection, but we didn’t have that option and the 3G network turned out to be good enough. However, one of the problems with using an iPhone is ensuring adequate sound quality. A first test of Ustream outdoors made it clear that we needed an external microphone. But it is very hard to find an external microphone for an iPhone that isn’t integrated into headphones. I found a few button microphones and bought one of each in order to try them all and use the best one. I was pretty happy with the one I found, but unless you want to spend something like 35 euros, it’s impossible to find an external mic with a cord that allows you to move the microphone away from the phone. That was a bit of a problem because the wedding chamber at townhall resonates a lot.

The next thing to overcome with Ustream was the commercials. A basic account is free because Ustream’s business model is based on advertising revenue. However, there are two ways to get around this. Channel owners can upgrade to a pro account for a monthly fee in order to eliminate all commercial from their channel(s). In a clever move, they also allow individual viewers to pay a much lower fee to not see any ads on any channel they visit. That’s clever because it maximizes choice and adds a high-volume, low-margin source of revenue to their mix.

Another problem we had with a live broadcast was the fact that the wedding was in French and most viewers would only speak English. To get around this problem, I wrote a blog post in advance to explain the French ceremoney and then our “camerawoman” (my godson’s big sister) held up cuecards at key moments to let people know what was happening.

At last count, about 25 friends and family members had watched the wedding, about 1/3 of them live. And the feedback we have gotten has been overwhelming. People who are far away are thrilled that they were able to attend virtually.

The wedding dinner and pre-dinner champagne toast were held at home. Since we now had wifi available, we were able to hook up to my father via Skype, and he gave the first toast via video call.

So what social media insights did I gain?

Contact me to explore the possibility of a workshop, speech or article on a related topic.
@ksukalac
+33 6 99 51 94 34
kristen [at] prospero DOT be