Several articles crossed my desk today about the impact of women in agriculture and women in Africa, so I decided to do a post about women effecting positive change. We tend to think of such women as exceptional. I’d like to believe there is an army of such women, and that most of them are simply unrecognized.

What better way to draw attention to a phenomenon and to build the momentum around it than by naming it? The word “cougar” is increasingly recognized as an older woman routinely “preying on” younger men. I’d like to baptize the women making a difference in Africa as “SHEtahs”. Do you know any shetahs?  If so, describe them here (links to more information are strongly encouraged) or tweet your nomination with the hashtag #shetah. Let’s see how much momentum we can build for the sheetah Hall of Fame by the next International Women’s Day (8 March).

Since my contacts with Africa have largely been in the field of agricultural development, and related policies, that’s where I’d like to start my list. Here are a few of the amazing women making a difference in agriculture today.

Dr. Agnes M. Abera-Kalibata is Rwanda’s Minister of Agriculture and Animal Resources. Her career has progressed rapidly since she completed her doctorate in Entomology at the University of Massachusetts Amherst in 2005. She then worked at the International Institute of Tropical Agriculture and for the World Bank before joining the Ministry of Agriuclture. She has been a strong advocate for investing heavily in agriculture to rebuild the country’s economy from the ground up and to reduce tensions between communities by ensuring that there is enough to eat. Rwanda’s recovery from the devastation of its civil war has surpassed expectations and Dr. Abera-Kalibata’s leadership in agriculture has contributed significantly. (Photo courtesy of IFDC)

Dr. Abera-Kalibata might stand out in the crowd, but she’s not alone. A growing number of women now head agricultural ministries in Africa as illustrated by this photo, taken of a ministerial panel at the 2010 Africa Green Revolution Forum in Accra (photo mine). 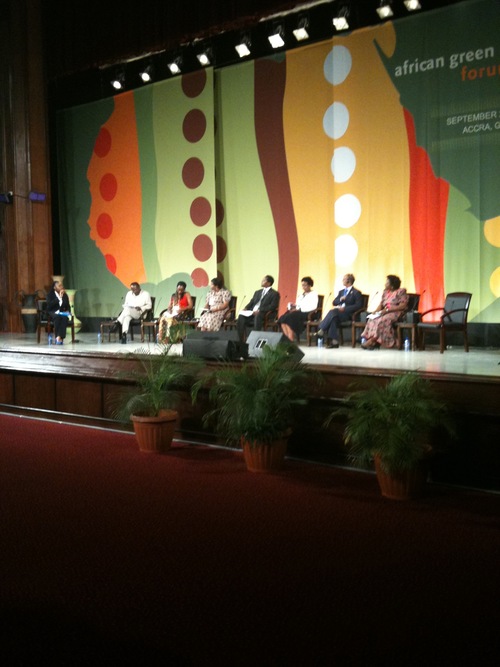 Dr. Wambugu is a prominent plant pathologist and virologist based in Kenya. She is a vocal advocate for using biotechnology for the benefit of Africa. One of her focus areas is trying to improve the resistance of bananas, a critically important staple food in Africa, to pests and diseases, In so doing, she has helped raise banana yields significantly and has enhanced farmer livelihoods and consumer nutrition. Sweet potatotes and sorghum are other African staple crops she has worked to improve. Her work extends beyond the laboratory and even the farmer’s field: she understands the importance of strengthening value chains so that farmers can profit from increased yields and crop quality. Learn more about her work by visiting the site of the Africa Harvest Biotech Foundation International (AHBFI) of which she is the Founder, Director and the Chief Executive Office. (Photo courtesy of AHBFI)

Lindiwe Majele Sibanda is CEO of the Food, Agriculture and Natural Resources Policy Analysis Network (FANRPAN), based in South Africa, and a leading spokesperson for the Farming First Principles. FANRPAN aims to be a link between farmers and policymakers, becuase she is adamant that sustainable solutions must be crafted, espoused and implemented by Africans themselves. She has a pragmatic attitude to identifying what works in Africa. For example, she has analyzed the factors that allowed Zimbabwe to be southern Africa’s breadbasket for many years in order to isolate factors that can be replicated in other parts of Africa.

To learn more about Dr. Sibanda and her work, watch this interview on CNBC:

This article is the first of what I hope will be a series of portraits of women making a difference in Africa. Your suggestions as comments or via Twitter (please use the hashtag #shetah to make sure I see your suggestions) will help me find more inspirational women to profile. The Shetahs Hall of Fame can be viewed at http://www.scoop.it/t/shetahs-hall-of-fame.

Contact me to explore the possibility of a workshop, speech or article on a related topic.
@ksukalac
+33 6 99 51 94 34
kristen [at] prospero DOT be